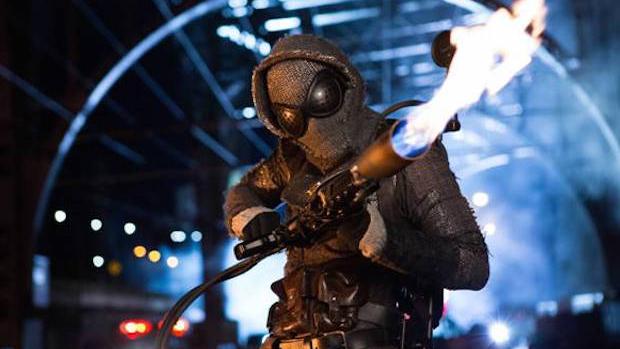 My love-hate relationship with this TV series continues. After the last couple of weak episodes I was happy to be surprised and gripped at moments during this episode “By Fire”. I was pleased this was not another villain of the week episode, but concentrates on progressing the series arc. The rushed origins of last week’s Firefly evokes much more pathos this week and her arc leads to a big reveal. The closing reveal is worthy of a mid-season finale and strengthens Gotham’s credentials at establishing their own lore set apart from the comics.

Penguin’s (Robin Lord Taylor) abusive relationship with poor old Butch (Drew Powell) adds an edge of intensity whenever Butch is on screen and this can only get better with much rumoured return of Fish Mooney. The slowly progressing romantic storyline of Ed Nygma’s (Cory Michael Smith) love life steps it up a notch this week. Ed Nygma’s arc and steady development is evidence Gotham can do character development well. The writing is often flawed in Gotham but this week was better than most. This episode is shown in the UK within a week of another comic book movie Deadpool was released. A very different beast, but it shows how good Morena Baccarin can be when given a decent script, something her character in Gotham Dr Leslie severely lacks.

I never really comment on Ben McKenzie’s Jim Gordon as he is just there to connect all the colourful villains. The weakness is again his under developed and boring Strike Force characters. There is literally no desire for vengeance for the forgettable strike force member lit up by the Firefly last week, no matter how angry Gordon gets. Theo Galavan (James Frain) remains as irritating as his weasel like character, but his motivations and slow infiltration into Gotham’s heart including Bruce Wayne is fascinating to watch, especially given the big reveal of this episode. So this week I am happy to report I am looking forward to next weeks episode.