It was just over a week ago that we were first allowed a glimpse at Benedict Cumberbatch in his role as Doctor Strange. Many praised the fact that Cumberbatch’s appearance was faithful to the original Marvel comic superhero and Doctor Strange is now extending its’ mystical grasp over the minds of superhero fans all over the world.

Every good superhero needs a secret hideout; a pad of power. It only makes sense then, that the latest artwork from the Doctor Strange production is the eponymous hero’s retreat, Sanctum Sanctorum. Looking like a nerd’s playhouse filled with the universe’s most magical artifacts, Doctor Strange’s home isn’t in the North Pole and it doesn’t fly, instead it’s in the most ordinary of places: Greenwich Village, New York (except it’s disguised).

Looking closer at the image, it seems to depict Strange’s meditation chamber, which has been painstakingly realised by the production team, as a picture of the final result from producer Louis D’Esposito shows. Doctor Strange will follow the origin story of our hero as he goes from handsome and successful surgeon, to down-and-out hobo with crippled hands, to saviour of the galaxy with a magnificent goatee, awesome wardrobe and sexy digs.

Benedict Cumberbatch stars as Doctor Strange in alongside Rachel McAdams, Mads Mikkelson and Chiwetel Ejiofor. It will be released October 28 and you can see the new set photos below. 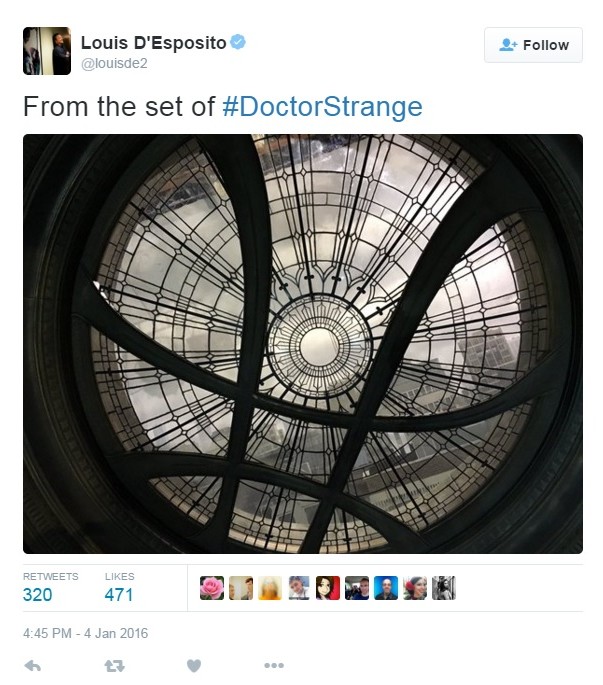