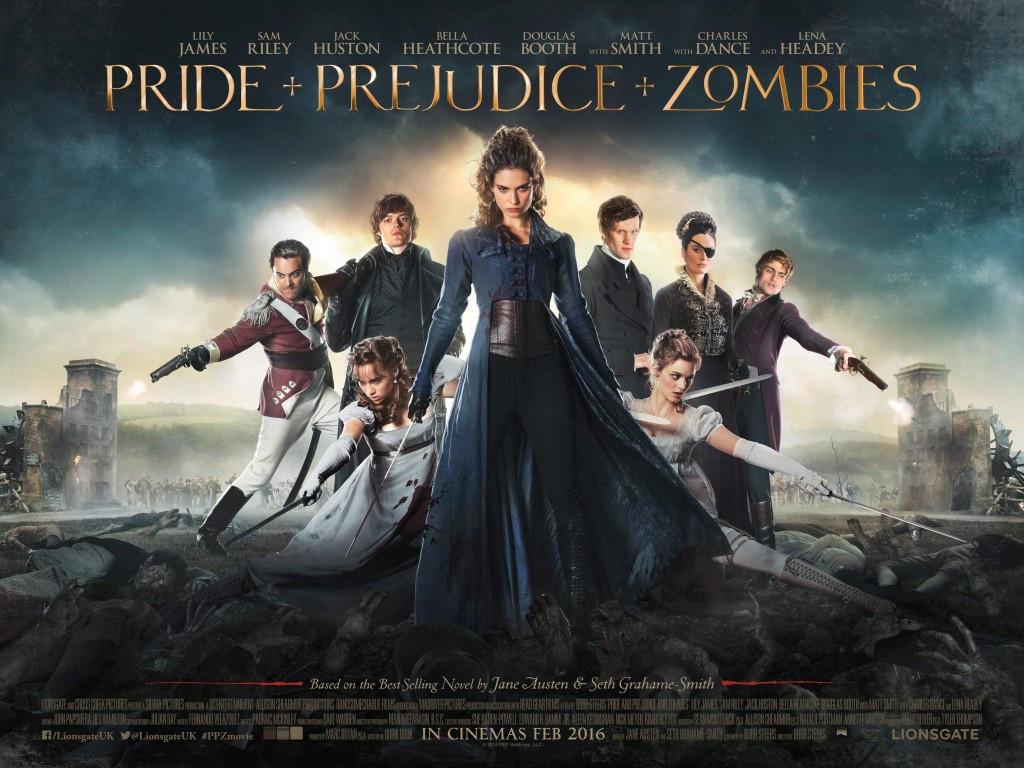 Let me get this off my chest: Abraham Lincoln: Vampire Hunter is an underrated modern classic! OK, maybe that’s a bit much, but damn I do love it in all its crazy glory. I certainly understand why a lot of people don’t appreciate it, and I think the problem is that the main joke is a hard sell.

The humour in the premise comes from adding ridiculous elements to an otherwise straight story and playing it completely sincerely. For most people, it ends up feeling either too silly or too serious, but for me it worked and I found it to be a ridiculously fun plundering of American history.

And now Seth Grahame-Smith’s other most well known work, a reworking of Jane Austen’s Pride and Prejudice into the world of the undead, has finally arrived on the big screen too. Does the joke work upon retelling, or will this one be lost on the general audience too?

First up, I must admit I have never read the original Austen novel. However, I have seen the 2005 film version with Keira Knightley, so I am at least somewhat familiar with the original story. From that standpoint, this retelling does follow all the same basic plot beats of the story for at least the first two thirds, though the context of many events have now been changed in the zombie apocalypse.

Despite the imminent threat of the undead horde, the story’s main themes of class, love, and the role of a woman remain completely intact. The film’s main joke is still playing the story sincerely despite the absurdity, and again for me it’s a gag worthy of a few laughs.

Adding kung fu battles to simple scenes of characters exchanging banter about betrothals and betrayals is a humorous sight, and by changing Elizabeth (James) from just a woman wanting some independence to one who wants to prove herself as a warrior first surprisingly adds a more modernist subtext. If you took out the zombies, the film would be a perfectly acceptable adaptation of Pride and Prejudice, but the third act is where the film does diverge considerably into a big action climax.

It’s an understandable change, as a zombie film with the straight-up original ending would be a little anti-climactic, and for what it is it’s an enjoyable sequence that does fit well with the film’s own arc and tone. However, setting up this new climax not only means restructuring the original sequence of events, it means adding in some new story material at the cost of developing the original plot better.

The film is well paced and I wouldn’t want to see it much longer, but to add so much to the story and yet make the film shorter than your average regular version of Pride and Prejudice does make it feel a little like cliff notes.

Pride and Prejudice and Zombies has a very strong cast that would have been excellent even in a regular adaptation, and their presence here in such a bizarre reinterpretation only gives the film more credence. Lily James makes for a wonderful Elizabeth Bennet, her previous experience with period pieces like Downton Abbey and Cinderella certainly helping her look the part, and she manages to make the character her own.

Then again, considering she’s the only Elizabeth Bennet who knows Chinese martial arts and can decapitate zombies with a battle-axe, it’s easy for her to stand apart. Equally, Sam Riley’s Mr Darcy captures the original essence of the character whilst also adding a more tragic back-story and a gruffer demeanour; he’s basically a Georgian Batman. He and James share good chemistry as both adversaries and lovers, but unfortunately their story feels a little truncated.

Most importantly, not as much time is given to Darcy’s important character arc, and by doing so it makes it a little harder to understand why Elizabeth eventually accepts him. The film does reinterpret their relationship by making their eventual love more mutual, through them saving each other rather than Darcy simply righting his wrongs, but even that feels a little too brief for it to be fully satisfying.

This simplification also afflicts the story between Jane (Heathcote) and Bingley (Booth), but given both actors are amongst the weaker cast members the loss isn’t so disappointing. Mr Collins is the character most unaffected by the scenery change, still the awkward doofus he was in the original, but Matt Smith’s certainly taking the film a little less seriously than everyone else with his excitable performance; he’s an entertaining presence for sure, but he perhaps takes it a little too far.

Charles Dance’s Mr Bennet is suitably doting and fatherly, and Lena Headey’s reinterpretation of Lady Catherine into a kick-ass zombie slayer is a change that provides both humour and awesomeness. Ultimately, it’s Jack Huston’s Wickham who has gone under the most drastic change from the original.

Reinterpreted from a mildly scheming side character into the film’s main villain, it’s a change that has roots given the already present rivalry between him and Darcy, but considering so much of the film’s new material centres around his character, it’s a bit baffling that he ends up feeling like an even less nuanced character than he was before.

From a visual perspective, the film from a distance again looks like it could be a normal adaptation, but it’s the little details that clue you into the different dynamic. It’s a great exercise in visual contrast, seeing Georgian country houses surrounded by spiked gates or women brandishing blades on their garters, but it manages to never feel out-of-place.

The action sequences are well choreographed, especially the martial arts sequences, but on a horror level it’s somewhat dissatisfying. There are plenty of decapitations, dismemberment and gutting, but the blood levels are pretty tame and some of the more gorier moments feel like they’ve been edited around to secure a lower rating; hopefully they can reinstate these for an unrated home video cut.

Pride and Prejudice and Zombies: if just the title sounds stupid for you, then you need not apply. However, if the idea of aristocrats bickering about inheritances whilst shooting zombies in the face sounds cool to you, then there’s certainly enough to enjoy here.

Again I’m worried I might be the only one who appreciates the joke, as I’m sure Jane Austen fans will be frustrated to the concessions made to the story, whilst horror nuts will be annoyed by the lack of gore, but for me it struck the right balance between sincere adaptation and glorified joke.

Abraham Lincoln: Vampire Hunter is the still the superior film for me, mainly because that did embrace the goofy a little more (c’mon, there’s a scene in that movie where Lincoln fights a vampire who throws horses at him!), but as its own film it achieves its goals admirably. Now, if you’ll excuse me, I need to write a version of To Kill a Mockingbird where it turns out Boo Radley was a werewolf the whole time.