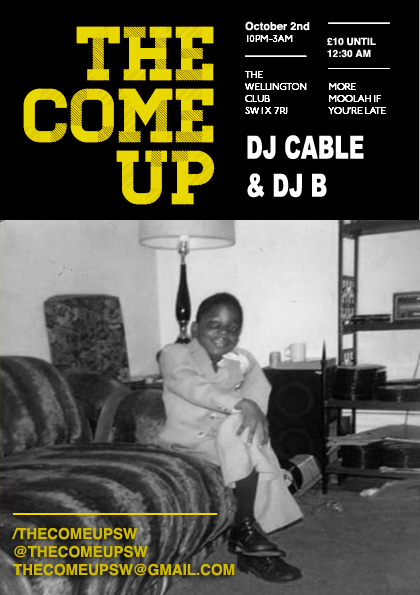 The Come Up returns on Wednesday, October 2 for the fifth installment of their Hip-Hop and R&B night held at The Wellington Club in Knightbridge London. Having hosted the likes of Wretch 32, Kano, Mark Morrison and Spencer Matthews as well as execs from SoulCulture, MTV and BET, The Come Up is fast becoming the go-to monthly hang-out in London.

“Following four successful events we’re back on Wednesday October 2nd at The Wellington Club in Knightsbridge; a fantastic members only club which boasts fantastic art work, graffiti and many an awe inspiring nook and cranny. It’s also home to an original Damien Hirst skull. In short, it’s really not like any other club you’ve ever seen. Our resident DJ B is well versed in the art of dropping a banging tune or 50, and this month we have DMC champ DJ Cable who’ll be assisting on the 1s and 2s.” – The Come Up

Doors open at 10pm and entry is fixed at £7 before 10:30pm, £10 before 12:30am and £15 afterwards. There is no dress code because “who follows dress codes anyway?“. For guestlist or table inquires, send an email to [email protected].