Vin Diesel has always been one to get the word out via social media and he’s done it again. He recently hit social media to deliver us all the latest news about the next addition to the Fast & Furious franchise in the form of its’ poster. According to the poster, which you can view below, the new film is titled Fast 8, will be released April 2017 and is clearly set in New York City.

Diesel has previously stated that the crew will be seen tearing up the streets of New York, but there is also talk about them filming partially in Cuba now that the U.S. has resumed diplomatic relations with the island state. However, nothing is final as of yet and it is understood that the director, F. Gary Gray, is still scouting locations. So don’t get your hopes up.

Fast & Furious 7 was a swan song for Paul Walker; a farewell from the team. It was also hugely successful, being the highest-grossing film of the franchise, perhaps due to its being a memorial for Walker. Knowing this, Fast 8 will no doubt be looking to reach new heights in its adrenaline-fueled fashion and I wouldn’t be surprised if it did. In any case, we can expect Fast 8 to be with us April 14, 2017. Keeping your eyes focused on Vin Diesel’s social media accounts for more news. 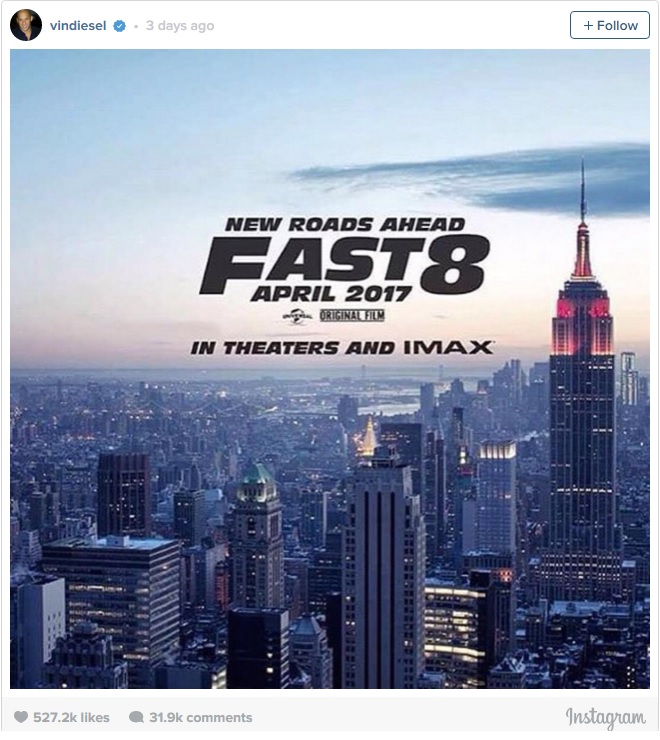