Black Panther is renowned for being one of the first black superheroes and now has his first solo film after appearing in Captain America: Civil War.

A week after the events of Captain America: Civil War, Prince T’Challa (Chadwick Boseman) is crowned king of Wakanda, the world’s most advanced country that disguises itself as an impoverished African nation. He also has to take on the mantle of the Black Panther, the nation’s protector and his first call to action is to stop weapons dealer Ulysses Klaue (Andy Serkis) from selling vibranium, the world’s strongest metal and Wakanda’s primary resource. But Klaue has allied himself with Killmonger (Michael B. Jordan), a man who is connected to a dark secret from Wakanda’s past.

Black Panther is the first true blockbuster of 2018 and has a similar air to Warner Brothers’ Wonder Woman. Like Wonder Woman – which was directed by a woman – Marvel hired an African-American creative team and the cast was predominately black. Also like in Wonder Woman, the people of Wakanda hid from the rest of the world which leads to a debate on whether there should be a change in policy. 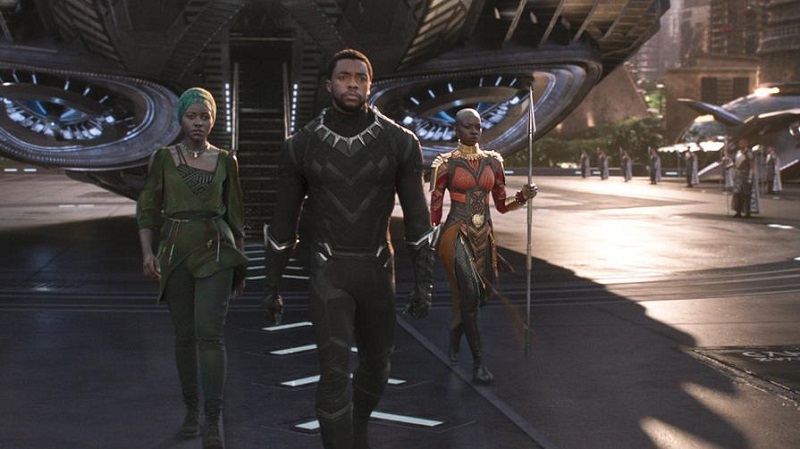 Black Panther was directed by Ryan Coogler – one of the hottest young directors around – having already made Fruitvale Station and Creed. Marvel films have unfairly been criticised for all blending together and being indistinct from each other. Yet Marvel Studios have hired many big names and emerging directors and many have put their stamp on their films, including Coogler.

Coogler previous films were urban-set dramas and had hip-hop artists work on the soundtrack. Despite Black Panther being set mostly in a futuristic city, Coogler does get to use these trademarks – he got to set the beginning of his film in his hometown of Oakland. Coogler also injected some urban themes into the film particularly through Killmonger who sees the white man as oppressors and colonialists and he wants to start a worldwide revolution with Wakandan technology – it’s a combination of African-American militancy and something out of Ian Fleming’s Live and Let Die.

Coogler made sure that Black Panther was a visually rich film. Wakanda was a cross between tribal African culture and sci-fi futurism – it’s a mix that shouldn’t work but Coogler made sure it did. There were great costumes influenced by various African tribes and their weapons which are high-tech versions of spears and shields. Coogler’s regular composer Ludwig Göransson added African drums to score which was particularly impactful for the Wakandan ceremonies.

Black Panther‘s story seems to have some similarities to the MCU Netflix show Luke Cage. Like Black Panther, Luke Cage is a famous black superhero with the TV show being set in Harlem. Both properties proudly display their black influences, have storylines involving high-tech weapons going out into the streets and have a familial element between the hero and the villain. One scene in Black Panther had a similarity to the end of one of the Blade movies – if it was deliberate, it would be a nice tribute.

Coogler and his co-writer Joe Robert Cole need to be praised for their work on the screenplay. Marvel Studios have become skilled at making most of their films work as standalone adventures and Black Panther continues this. Coogler and Cole ensured that every story element and all parts of the world tied together. There was no fault in this aspect of the film.

Fans of Creed know that Coogler can shoot action and there were some impressive sequences. The big set-piece was a huge chase in Busan, South Korea where Black Panther, Wakandan spy Nakia (Lupita Nyong’o) and Okoye (Danai Gurira), commander of the royal guard chase down Klaue and his henchmen. 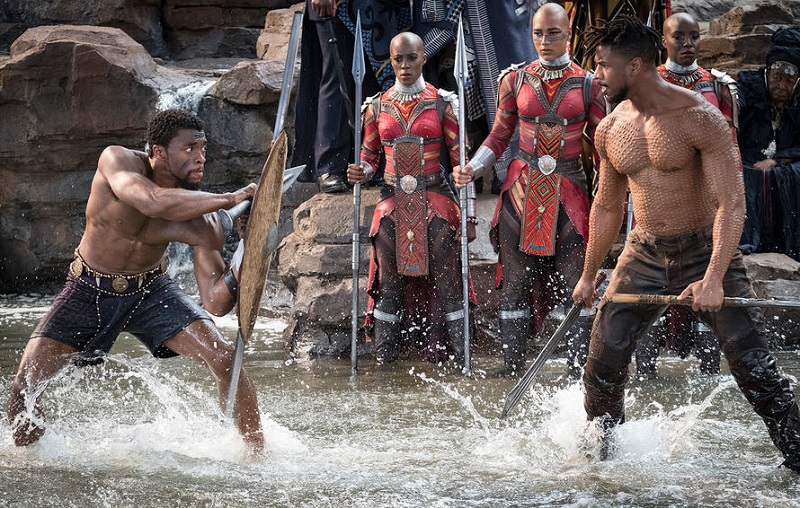 However, compared to other MCU films Black Panther is surprisingly action light. Between the Busan chase and the final battle sequence there are few fights. It was disappointing in this aspect considering other Marvel films have gotten a better balance of action and drama.

An issue that has affected the MCU is most of the villains are lacklustre. Only Loki, Red Skull and The Vulture are memorable. Fortunately Killmonger and Klaue are close to the standards of the aforementioned villains. Serkis was simply having a blast as Klaue and was properly relieved that he could star in an action film without a skin-tight motion-capture suit. He revelled in the chase.

What made Killmonger an interesting villain was his ideology that backs up his villainous scheme and there was a personal element in his reasoning. Even if you don’t agree with what he says or his methods you can at least sympathise with him. Jordan, who has starred in Coogler’s previous films, was physically imposing and he continues to show his growing star power.

The cast also featured other top and emerging talents like Boseman, Nyong’o and The Walking Dead’s Gurira who were all solid in their roles. Forrest Whittaker and Angela Bassett were given the supporting roles that added some gravitas to the production.

The biggest surprise in the cast was British-Guyanese actress Letitia Wright as T’Challa’s younger sister, Shuri. Her excitement as the teenage genius was infectious in a role that was pretty much Q from the James Bond films. She is clearly a star in the making.

Black Panther is a strong entry in MCU thanks to its cast, screenplay and art-direction but it was not as revolutionary as some critics make it out to be. It does not quite match the highs of Iron Man, The Avengers, Thor: Ragnarok and the Captain America trilogy.