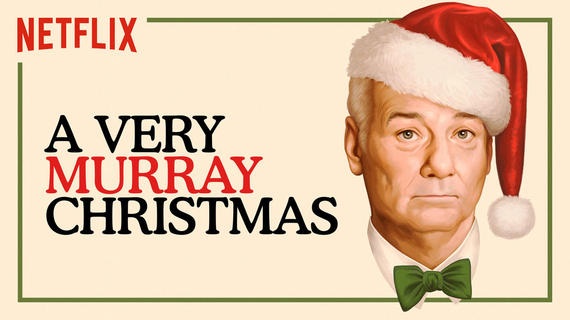 This hour long holiday special on Netflix has been billed as an homage to variety shows of old. There is plenty of celebrities popping up including Amy Poehler, Rashida Jones, Chris Rock and George Clooney. There is also Miley Cyrus, who is given a bit too much screen time to showcase her singing talents as you want more of the best thing in it….Bill Murray.

Murray is well known for his unique choices including having a freephone number instead of an agent. He is an internet sensation due to his habit of crashing private parties and his association with the phrase ‘No-one will ever believe you’. So it is perhaps not a surprise that this Netflix special is a little odd.

It is essentially a Christmas jukebox musical, with a sprinkle of comedy. It is split into three distinct parts with little crossover between them. It starts with a contractually obliged Murray forced to go on with a live holiday TV special at a New York hotel. This is despite all the guests cancelling due to the poor weather. The highlight of the opening section is a well utilised Chris Rock in a musical number.

Next we move on to a sing-a-long with the hotel staff featuring plenty of celebrities, most of which are characters within the fiction. The bizarre factor jumps up a notch here as the waitress (Jenny Lewis) launches into a duet followed by the chefs (rock band the Phoenix) performing a Beach Boys cover.

The third section is the most bizarre, a glitzy dream sequence with Clooney and Cyrus. Clooney almost steals the whole show as he repeatedly exclaims “Santa Claus wants some lovin”

Murray is clearly enjoying himself and if you like Murray I’m sure you will enjoy it too. However for most viewers it will pass by as a little oddity with a festive sing-a-long charm that would test your patience with a longer running time.